Before Wild Wild West, Gilligan’s Island, Batman, Hogan’s Heroes, Star Trek or Jerry Lewis, I watched the popular sitcom I Love Lucy. This year we are celebrating Lucille Ball’s 100th birthday, August 6, 1911 and the 60th anniversary of the I Love Lucy Show. The black-and-white series originally ran from October 15, 1951, to May 6, 1957.
An abundance of publicity photographs are resurfacing in newspapers, magazines, blogs, television programs and articles commemorating the events. Many of the photographs, seared into our collective memory, show the antics and zany impersonations by Lucy the comedienne, film, television, stage and radio actress and the charismatic Desi Arnaz the musician, actor and television producer. Thousands of images exist. Unfortunately the duo’s “iconic” images being published fail to credit the photographer. Instead, it credits a photo agency, stock agency, collector or studio. "Lucy, you have some splaining to do" as Ricky would say.

Photographer Murray Garrett says "I must tell you that I am offended on behalf of all
photojournalists who worked hard covering the Hollywood events of the 40's, 50's, 60's and seventies to be told by a fellow journalist that the use of his work will go UNCREDITED and UNPAID for."

Garrett was Bob Hope's personal photographer from 1948 until 1973. He goes on to say, “Mr. Hope and Lucille Ball were close personal friends and worked together often. They had enormous respect for each other's unique talents and were each other's best audience. It was a pleasure to work with them. On the other hand, my experiences with Ms. Ball and Mr. Arnaz were totally different. I found that working with Mr. Arnaz was trying because he was a difficult subject who seemed to have a fear of being upstaged by his wife. This was most evident to me, prior to the I Love Lucy TV show.”

Author Tom Watson says many of the photographic prints of that era have no photo credit. “Most of the "iconic" images from I Love Lucy were taken at the studio, either during rehearsal or during an actual filming, by staff photographers -- assigned to the show usually by the network, but occasionally by sponsors or other interests... Because this was either a staff-assignment or "work for hire," the name(s) of the individual photographer was often not recorded.”

Watson goes on to say; “We do see the name "D. B. Graybill" on many of the I Love Lucy images. He was a photographer here in Los Angeles who was hired by CBS to do the "stills" of many of those shows. There were many other photographers at the network's photo department who specialized in portrait work. Others, such as Irving Haberman, did both.”

Lucy also engaged the services of such independent Hollywood photographers as John Engstead
to create many of the publicity photos, says Watson.

Photographers in the 1940’s and 50’s used single frame 4 X 5 sheet film cameras. They had the skills to use exquisite lighting techniques and the vision to capture the essence of Lucy and Desi in a single frame. The images were then processed and printed by hand in the darkroom. The gelatin silver print was the dominant photographic process used during that period.

At an early age these comical and well-known photographs influenced my awareness of what Henri Cartier-Bresson coined “The decisive moment”.

Although Cartier-Bresson’s work is more reportage the premise is the same. Capture a fleeting moment such as the incredulous expressions, the bulging eyes, the importance of hand gestures, tipping of the hat, body language and lighting, all seen in the publicity and editorial photographs of that golden era.

Cartier-Bresson says, “The creative act lasts but a brief moment, a lightning instant of give-and-take, just long enough for you to level the camera and to trap the fleeting prey in your little box.”
The French photographer, considered to be the father of modern photojournalism might not have ever photographed Lucy or Desi but that magic moment is captured by his contemporaries.

For decades, I sat side by side with my mom, Lilia Dole Diaz, watching reruns of the innovative television show featuring Lucy and her Cuban born husband Desi and all their wild comic routines. The syndicated program never failed to make us laugh.

Now my kids, James and Angelika, ask to watch it on DVD and they love it! I Love Lucy - The Complete First Season

I hope they will learn to appreciate the magic of these still photographs captured by the master photographers of their time.

An extensive search on the Internet finds images of Lucy and Desi throughout their careers with no credit given to the photographer. In contrast, the photo galleries on some particular sites, LIFE.com, Getty Images, do reveal the names of several photographers.

What I did find is remarkable. The highly talented, accomplished photojournalists, celebrity, Hollywood studio and commercial photographers were tops in their field during Lucy’s career.

“These are the most unsung artists of the entire business.” Actor Morgan Woodward says in the documentary In Focus: The Hollywood Lens of Murray Garrett. The trailer for the video can be seen on You Tube.


Visit msnbc.com for Breaking News, World News, and News about the Economy 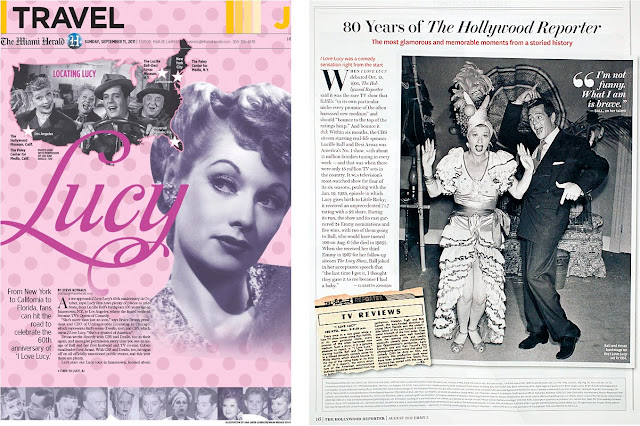 From New York to California to Florida fans can hit the road to celebrate the 60th anniversary of 'I Love Lucy' By Steve Rothaus, The Miami Herald

Ernest Bachrach (1899-1973): Headed the photographic department at RKO from its inception in 1929 until his retirement in the late 1950’s
Clarence Sinclair Bull (1896-1979):Head of MGM's Stills Department from 1924 to 1960, he pioneered celebrity portraiture with his alluring, mysteriously lit images.
Phil Burchman:Celebrity photographer.
Ed Clark (1911-2000): The photojournalist’s career spanned a period of 60 years including 22 years as a staff photographer for Life Magazine.
Ralph Crane: A photojournalist and an early contributor for LIFE magazine from the first issue until its last in 1972 as a staff photographer.
Loomis Dean (1917-2005): In a photographic career spanning six decades Dean made many of the memorable pictures of Hollywood stars for Life magazine.
John Engstead (1909-1983): Began his career in 1926 as an office boy at Paramount Pictures. Within a year he was promoted to studio portrait photographer. Later, Engstead built a studio in Los Angeles that became a gathering place for celebrities.
John Florea (1916-2000): Life magazine photographer known to have chronicled the greatest battles of WWII and the greatest stars of Hollywood. He later became a television director.
Murray Garrett: Bob Hopes personal photographer from 1948 to 1973, specializing in show business, first in New York in the early 1940's then in Hollywood. He was sent on assignment by the best news magazines, including LIFE, TIME, and LOOK.
Durwood “Bud” Graybill (1909-1978): Hollywood photographer that shot most of the “I Love Lucy” series stills.
Irving Haberman (1916-2003): One of the preeminent news photographers of the 20th century. His career spanned nearly 50 years, including 35 years at CBS. Awarded Photographer of the Year in 1969 and a Lifetime Achievement Award in 1991 by the New York Press Photographers Association.
Phillipe Halsman (1906-1979): The photographer developed a philosophy of jump photography, which he called jumpology. He published Philippe Halsman's Jump Book in 1959 and 178 photographs of celebrity jumpers including Lucy.
George Hurrell (1904-1992): Known as one of the greatest of the Classic Hollywood Portrait Photographers. Turner Network Television calls him the king of glamour photographers.
Victor Keppler (1904-1987): An advertising photographer. In his teens he improvised a commercial darkroom in a coal cellar.
Bob Landry: Life Magazine photographer. Accompanied the first wave of troops landing at Normandy Beach during the WWII D-Day invasion of France for Life magazine. His images of that day were lost.
Gene Lester (1910-1994): Pioneering Hollywood photographer who memorialized celebrities for the Saturday Evening Post.
Thomas D. McAvoy: One of four photographers hired by Time founder Henry Luce, for a secret start-up known only as Project X. Now known as LIFE magazine since November 23, 1936.
Leonard McCombe: Combat photographer during WWII and staff photographer at Life magazine. McCombe followed the fighting in Normandy with British and Canadian forces after the D-Day invasion for Picture Post magazine.
Leonard Nadel: The Smithsonian Institution acquired Nadel’s images shot in 1956 of The Bracero program. It allowed Mexican nationals to take temporary agricultural work in the United States.
Paul Popper: Photojournalist Paul Popper created the Popperfoto collection in 1934 which became one of Europe’s oldest and largest independently-owned image libraries.
Gabor "Gabi" Rona: Staff photographer at CBS Television City for 33 years. Rona says “I was a male war bride” Under the 1945 Alien War Bride Act, managed to escape Nazi war camps during the war then married Blossom Bernstein who served in the U.S. Coast Guard.
Walter Sanders: Combat photographer for Life magazine during WWII. Sanders photographed Ball in an extravagant French Costume for the film “DuBarry Was a Lady” set in the 18th century.
Wallace Seawell (1916-2007): Hollywood portrait photographer. Seawell served with the Army Signal Corps in Los Angeles making nearly fifty training films.
Peter Stackpole (1913-1997): Stackpole worked for LIFE from 1936 to 1960, joining Alfred Eisenstaedt, Margaret Bourke-White and Thomas McAvoy as the magazine's first staff photographers. His work also appeared in Time, Fortune, U.S. Camera and Vanity Fair. During his tenure at Life.
Weegee (Arthur Felig) (1899-1968): Felig earned the name Weegee (appropriated from the Ouija board) for his uncanny ability to arrive first at the scene of violence and catastrophe in New York City. He would then sell his photographs to tabloids and news agencies.