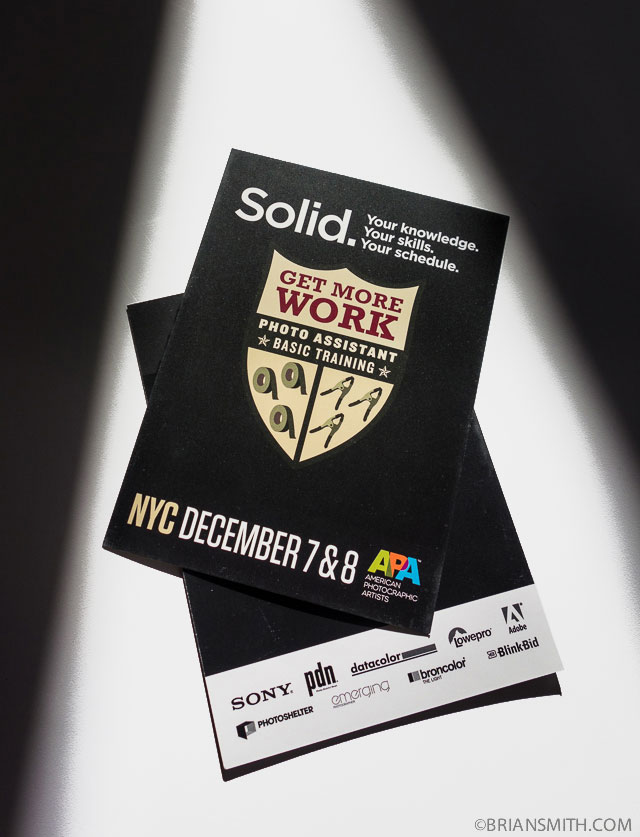 Get a major head start on a career in the photo industry. Join Brian Smith and APA New York Chapter Chair Tony Gale in New York on December 7-8, 2013 for a great event for photo students, assistants and emerging photographers – Assistant Basic Training.

You’ll get expert instruction not available anywhere else with panel discussions, equipment demonstrations from industry experts, and hands-on training, attendees will come away with the essential knowledge and confidence to build your own Pro Assistant reputation. Acquire a comprehensive understanding of professional assisting behavioral guidelines, including contemporary set-etiquette, and discover how this valuable training will get you more call-backs – more repeat clients, more work.

Kicks off with the popular “Assistant Panel” which includes experts on working as a photo assistant. Get real world answers to all questions from the attendees. Following the panel discussion will be exciting live software and equipment demonstrations with industry reps from Sony, Profoto, and Adobe. Learn from the pros. Industry reps will be on hand to answer all your questions.
DAY ONE PANEL DISCUSSION PANELISTS

When was the last time you used a new assistant?
How did you find them?
What do you look for in an assistant?
DAY TWO: December 7, 2013

Full on, hands-on workshops with much of the gear an assistant will most likely encounter on the majority of professional photo shoots. Many aspects of assisting will be explained in great detail, i.e. strobes, hot lights, flags, scrims, set etiquette, the assistant kit, tips on getting work, billing, and how to deal with the dreaded cancellation. Following classroom discussion and demonstrations, participants will work along side the Pro Photographers to discover crucial pro assisting skills.
Master Assisting Professionalism. Get booked solid.
REGISTER NOW

More speaking appearances by Brian Smith.
Posted by al diaz at 9:39 AM No comments: Links to this post

Former Miami Herald photojournalist Jeffery Salter blogs about his photo session with former member of the United States House of Representatives Allen West for book cover of "Guardian Of The Republic".

When the retired Lt. Colonel Allen B. West roared up to the studio and drove his Honda VTX 1800R retro cruiser inside, my team didn’t know if they should salute or run for cover.

Allan West “Guardian of the People” book cover by Jeffery Salter | Miami Florida
When I mentioned to Rep. Allen that I personally preferred BMW motorcycles, it could have been a constitutional crisis, but we managed to get past that by having both grown up as Army Brats, West’s father was a War World II veteran and so was mine. When West was in the military he was stationed at Fort Hood, Texas which sits next door to an old Sante Fe railroad depot town named Killeen, Tx. which was named after Frank P. Killeen, a manager of the railroad. And that’s where I grew up, throwing newspapers, working at Taco Bell and shooting photos for Ellison High School year book. Go Eagles. Anyway I digress.
I was commissioned by Random House to photograph the take no prisoners, former paratrooper, master Scuba instructor and former member of the United States House of Representatives Allen West.
We chose a very direct approach to the visual style of the photograph. Hard light, minimal shadows and crisp focus to match the personality and the tone of this straight shooting book which is filled with prescriptive politics…basically giving his views on how to overhaul government.
This is an outtake which I toned differently. It’s funny how with time we feel an image differently.