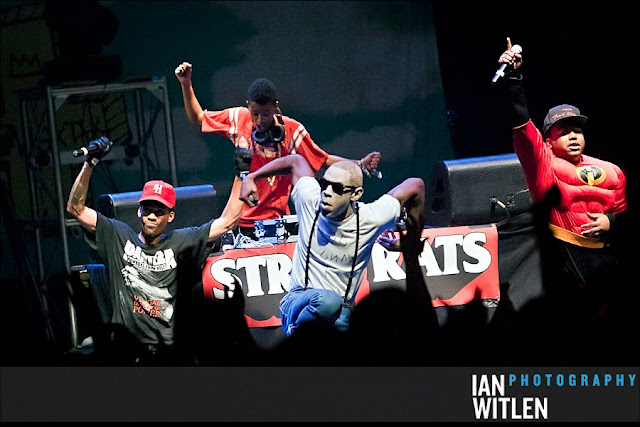 By Al Diaz
ALDIAZPHOTO.com
Odd Future rapper, Left Brain, allegedly attacks photographer Amy Harris during concert in New Orleans on October 30.
Harris says she was slapped in the head by the rapper while taking photos during concert from the photo pit.
The credentialed photographer was escorted there to cover the event by concert promoters for Mitch Schneider Organization and organizers of Voodoo Experience.
Miami New Times freelance photographer Ian Witlen says he has covered the rappers more than once. Last night in Miami and for Spin Magazine during concert in Austin Texas.
"They used my head as a step stool multiple times, for stage diving and crowd surfing. At that show Tyler the Creator climbed onto a tall stack of amplifiers, then the the stage roof, leaped about 25 feet into the crowd breaking some kids nose. The Odd Future rapper thought he was in trouble but the kid just told them, no I just want to meet you guys.
Witlen says during last nights concert at the The Fillmore Miami Beach at Jackie Gleason Theater the photographers were kept way back from the stage at the soundboard. Witlen says rumor has it that Odd Future is looking to band photographers from future shows.
Here are the links to the Harris interview plus more.
NBC33 News
VenuesToday
SPIN
Sportsshooter Message Board
Odd Future - Transylvania - Voodoo Experience 2011
Today, Amy Harris responds with an official statement.
"I was very disheartened to learn yesterday that Odd Future is denying that one of its members, Vyron Turner (“Left Brain”), engaged in the violent conduct that so many people witnessed and even photographed or videotaped. After he so publicly attacked me, I truly believed that an apology would be immediately forthcoming, which is why I declined to press charges at that time. The unexpected turn of events, including an attack by Odd Future on my credibility and motives for discussing the incident, have caused me to re-evaluate my initial decision. I’ve contacted an attorney – Amy Borlund with Doll Amir & Eley in Los Angeles – and am pursuing my options. At a minimum, I am seeking a public apology from Vyron Turner. Ultimately, I want a resolution in which Turner is held accountable for his actions."
Posted by al diaz at 4:19 PM