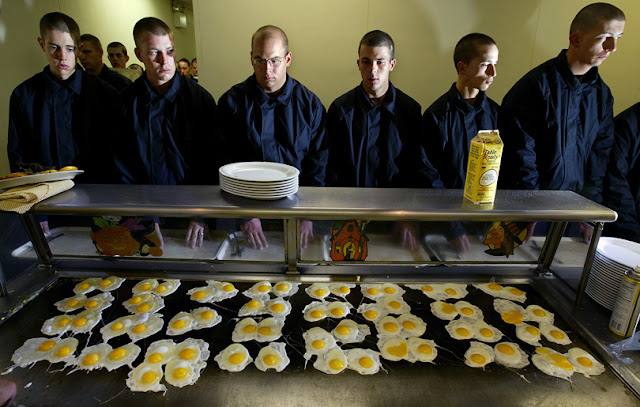 Think Tank Photo in conjunction with Lexar Media choose a photograph by Al Diaz for their Ten Most Awesome Images competition.
The contest continues.
For round two of the competition the ten winning photographers will shoot with a 8gb Lexar 600x memory card for a day or two, as many or as little images as they like.
There will be a public ‘Guess’ at how many images, collectively, were taken by the winning ten. That winner will win a bag of their choice (excluding the Logistics Manager, sorry!) from the Think Tank Photo website… AND an 8GB 600x Lexar Memory card!
PUBLIC GUESS STARTS MONDAY SEPTEMBER 5th. PUBLIC GUESS WINNER ANNOUNCED FRIDAY SEPTEMBER 9TH
For contest rules click here.
Al’s winning image was published on assignment for the book “A Day in the Life of the United States Armed Forces.”
Al says, The most awesome moment occurred moments before taking this image at the US Coast Guard Training Center. "Before sunrise and half asleep, I stumbled my way towards the mess hall to photograph the trainees at breakfast. The entrance was packed shoulder to shoulder and layers deep of raw cadets. The Chief Quartermaster hollers, make way! An entire company of men and woman stomped their boots then slammed their backs up against the wall, three deep on either side. I walked straight up the middle into the kitchen and spotted the eggs.
To light up their expressions I placed a strobe on the side, fired by using my Pocket Wizard remote flash triggers.”
Posted by al diaz at 7:00 AM No comments: