Vision becomes artistic reality at Marlins Park.
Jeffrey Loria’s idea, which began on a napkin, is complete. What is left is for players and fans to make it their home.
By ALDIAZ
aldiaz305@aol.com
Here is a behind the scenes look at the portrait session with Loria in the upper decks over left field. The new baseball stadium is built on the former site of the Orange Bowl.

After much debate on where to set up, behind the pitchers mound or in the upper decks, the right choice was made.
The next day photographer Paul Morris joined me to shoot aerials of the new home of the Miami Marlins in the magic city at sunset. 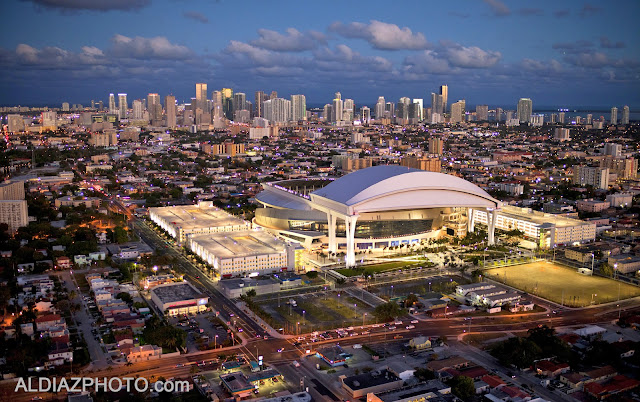 Camera Copters, piloted by J.P. Robinson is my first choice for aerial photography. J.P. and owner Paul Barth have the reputation for always putting the camera in the right spot while floating in midair! Their helicopters have the ability to be flown with the doors off, and have restraint systems in place that allows the photographer to hang out the door, but feel totally secure. Well I’m not sure about that part but it does work. Unlike the past using the Black Rapid RS-7 Curve camera strap added that sense of security and reduced the risk of any accidents while flying over the stadium.
The images appeared in The Miami Herald commemorative section titled Jeffrey Loria’s New Masterpiece: Marlins Park.
BY CLARK SPENCER
CSPENCER@MIAMIHERALD.COM

It began four years ago on a paper napkin.

That’s when Marlins owner Jeffrey Loria sat down with renowned ballpark architect Earl Santee to discuss his vision of how a Major League baseball venue in Miami should look.

Santee had worked on a number of the big-league ballparks designed and constructed over the past decade, including PNC Park in Pittsburgh, Minute Maid Park in Houston, and the new Yankee Stadium.

But Loria wanted something altogether different, a place that would help accentuate Miami’s landscape. Something contemporary. Something colorful. Something different.

And so, at their meeting in the lobby of the Claridge’s hotel in London, Loria grabbed a napkin, sketched out a rough rendering of the type of ballpark he had in mind, and handed it over to Santee.

“My words to him were, ‘I want you to take this and bring me back some real drawings,’ ” Loria recalled. “I did not want to see us build a building that was a concrete mass. It had to be something that would fit into Miami’s plan for beautiful buildings going forward and great contemporary architecture.”