FLASHES OF 2013
Miami Herald staff photographers submit the images from the past year that meant the most to them, and share their thoughts. 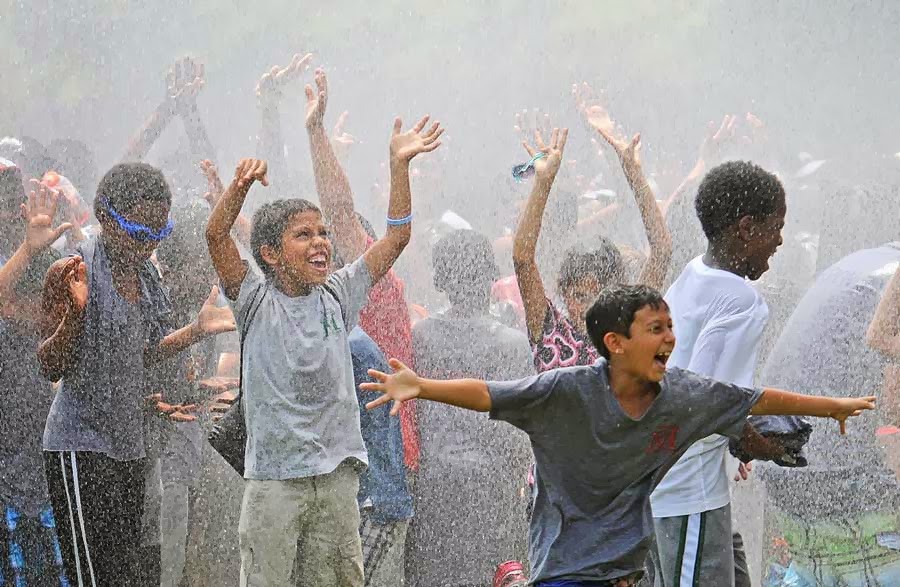 Young campers from several parks in Miami enjoy the cool waters sprayed on them by firefighters from the City of Miami Fire Station Q-9. The hosing occured during the annual City of Miami Parks & Recreation's ‘End of the Summer Picnic' for over 2,500 kids, held at Morningside Park. This is one of those happy moments that puts a smile on our readers' faces.

MARICE COHN BAND has been a photographer at the Miami Herald since 1979. A native of Miami, Cohn Band graduated from Florida International University with a BFA in photography. In addition to working full-time at the Miami Herald, she has been a Girl Scout leader for 23 years, on Miami Beach, where she lives with her husband Michael. She is the proud mother of three daughters, Jessie, Samantha, and Alexandra.  Editor's note: For close to 35 years Cohn Band has captured the exuberance of South Florida and the faces of our youth. Her signature style of finding ordinary children expressing joy in extraordinary ways has been a feature of the Miami Herald that has lifted the community's spirits for years. "I will miss seizing those moments and sharing them with the community."  Cohn Band's last day as a Herald staffer was Dec. 6. 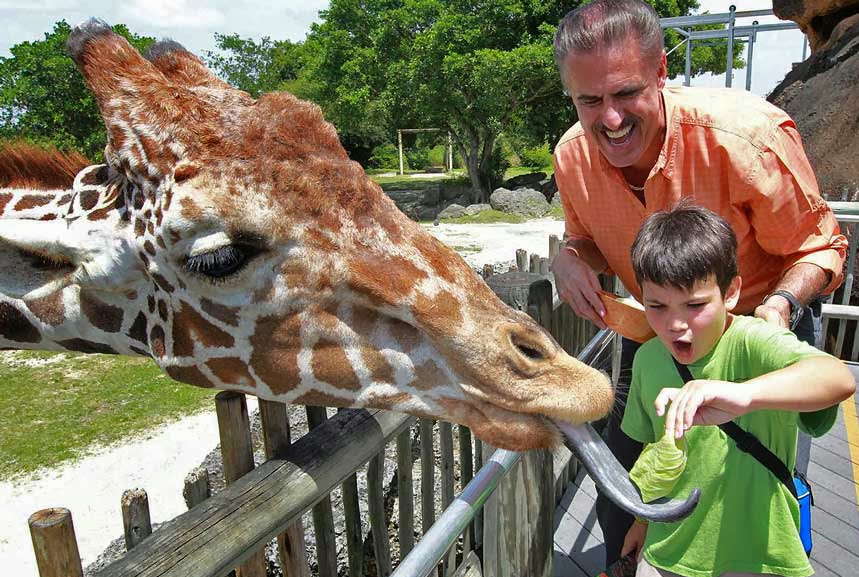 I like this feature picture of young Javier Escribano attempting to feed a giraffe, because of the genuinely suprised look on the boy's face. Javier gets a little help from Ron Magill, Director of Communications at Zoo Miami, during the annual Zoofari summer camp.

PETER ANDREW BOSCH is an award-winning photographer, who has spent a large part of his more than three decades with the Herald documenting the pleas of humans in disasters, wars and other conflict situations. He started his international career with a trip to Haiti in the early 80's after the military coup of ‘Baby Doc' Duvalier. Since then, besides returning to Haiti many times, Bosch has covered South Central America and other Caribbean nations. He also traveled to the Middle East, covering stories in Israel, Afghanistan, Iraq, Pakistan and Iran, as well as Egypt and Ethiopia. 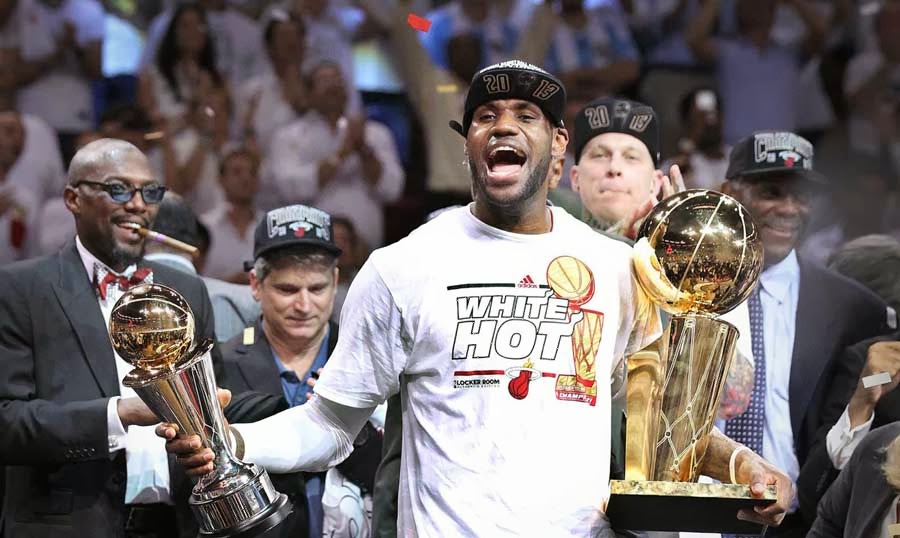 LeBron James, a victorious gladiator, holds court and roars in triumph at the pinnacle of his career with all his trophies after the Miami Heat defeats the San Antonio Spurs in Game 7 of the NBA Finals.   As a photojournalist I have to be ready before the moment despite the rumble from thousands of screeching fans, security telling me I can't stand there and flailing hands armed with smart phones blocking my view. It's an uphill battle any time I'm trying to capture a defining image.

AL DIAZ is a veteran Miami Herald staffer and a member of the Herald news team that won the 1993 Pulitzer Prize Gold Medal for the newspaper's coverage of Hurricane Andrew. Diaz earned his journalism degree from the University of Florida in 1983 and was hired as a staff photographer by the Miami Herald upon graduation. A first generation Cuban American, he and his wife, Cindy Seip-Diaz, their children, Angelika and James Bartek and their dog Amanda, make their home in Coral Gables. 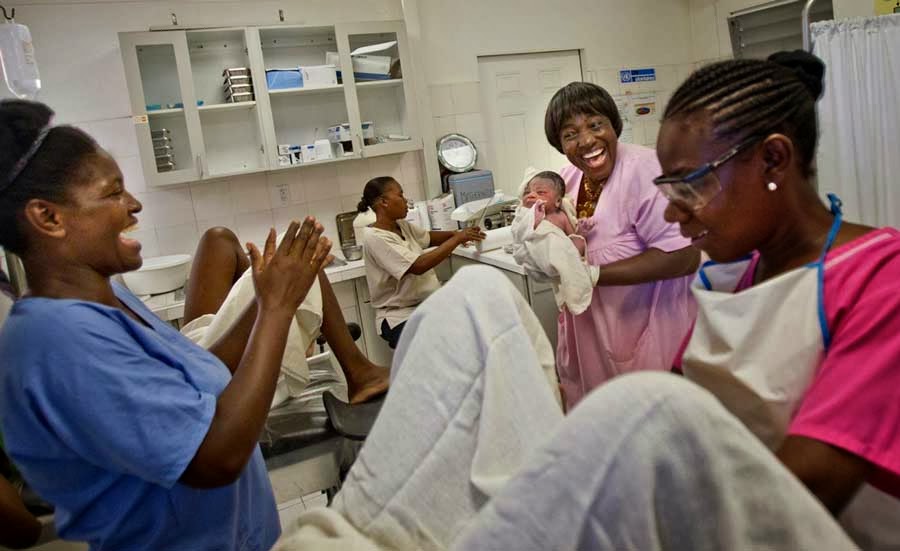 With her infectious smile and comforting personality, midwife Mariame Ovedrago was a warm, bright light in the middle of a grim story on the rising number of unsafe abortions in Haiti. Here, she proudly shows off a newborn she delivered as two other midwives help another woman give birth at a healthcare facility at Petite Place Cazeau funded by UNFPA and the Haitian government. Her ability to soothe and celebrate with new moms calmed everybody in the midst of joy, pain and chaos.

PATRICK FARRELL has been a photographer at The Miami Herald since 1987. He was the recipient of the 2009 Pulitzer Prize for Breaking News Photography. Patrick graduated from the University of Miami in 1981 with a major in film. He grew up in Miami, the seventh child in a family of 12. He is married to writer Jodi Mailander Farrell and they have two daughters, Annie, 14, and Lucy, 13. 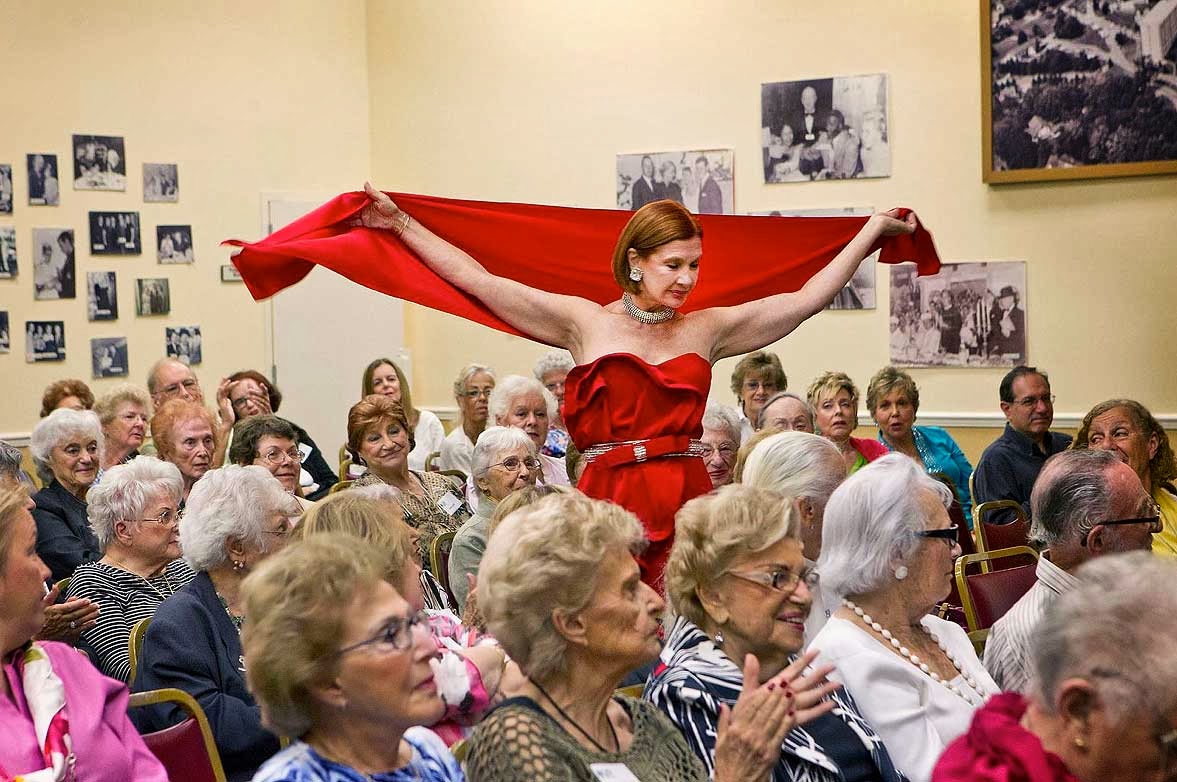 This is one of my favorite photos of the year because it reminds me of the fact that we are all young at heart. SuSu Smith, who has been modeling since she was 16, according to her ‘a few decades,' dazzles the crowd at Forest Trace, a senior community at Inverrary, who were on hand to see a group of 80- and 90-year-olds putting on a fashion show.

C.W. GRIFFIN has been a staff photographer at the Miami Herald for the past 30 years. His work has appeared in National Geographic, Smithsonian and Time, and in multiple volumes of the Day in the Life photo book series, for which top 100 photojournalists in the world were assigned to various countries to create a book from a one-day shoot. He has taught at the University of Miami for more than 11 years, and also teaches at the Little Haiti Cultural Center with Iris PhotoCollective. His work has also been a part of many major photography exhibits in such galleries as the Brooklyn Museum of Art, The Corcoran Gallery of Art and the Historical Museum of Miami. While serving in the military, he was the first African American to be named military photographer of the year for all branches of service. 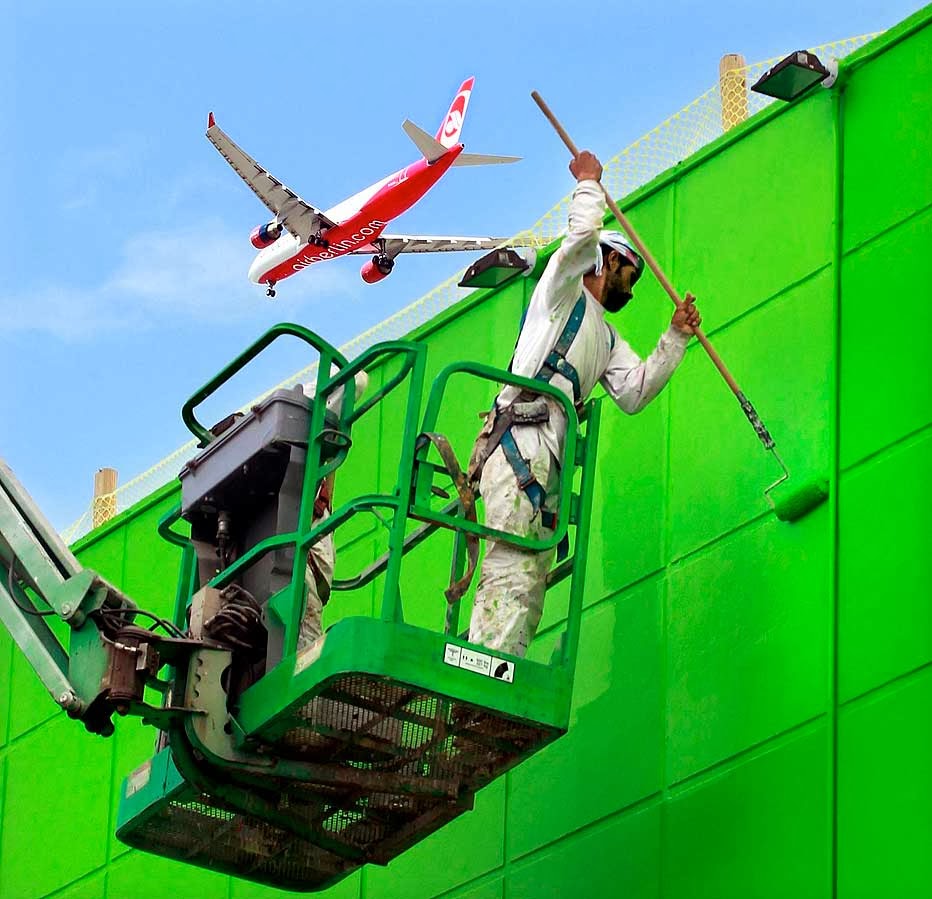 On an uncharacteristically slow news day in September, I headed out to find a feature photo for the Herald's Local & State section and website. I was drawn to Miami's Wynwood Arts District, where building exteriors burst with color and graffiti. I saw Pablo Garcia applying lime-green paint to the Wynwood House, a new Goldman Properties project. Garcia focused on his work and appeared oblivious to the low-flying Air Berlin jet approaching Miami International Airport. The jet's entry into my camera viewfinder brought a serendipitous element to the image.

MARSHA HALPER began working at the Miami Herald in 1983. She is married to Ry Mueller and is the proud parent of Jackson Fadely, a freshman at FIU's Honors College. She is a graduate of Guilford College in Greensboro, North Carolina. 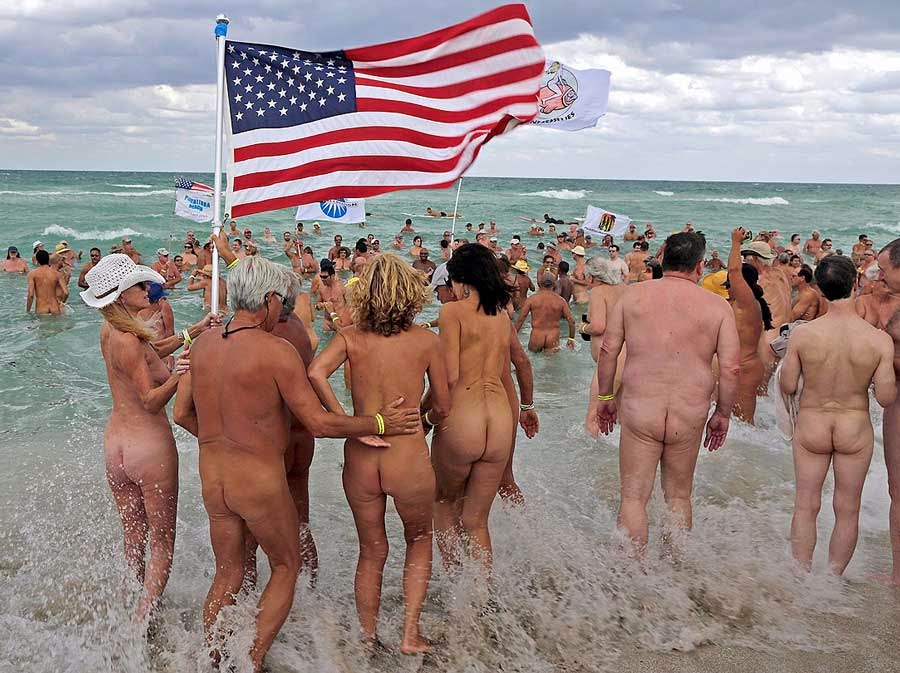 Where else than Miami can nudists wrap their right to bare arms and other parts while hoisting the American flag? Miami is a magical place where anything can happen and everything generally does. Welcome to Miami!

CARL PHILIPPE JUSTE, born in Port-au-Prince, Juste came to the United States with his politcally active family in 1965. Raised in Brooklyn, he arrived in Miami in 1973, earned a bachelor's degree at the University of Miami and has worked at the Miami Herald since 1991. Assignments have taken him to Pakistan, Iraq and Afghanistan, as well as to the nation of his birth. Juste is co-founder of Iris PhotoCollective, a collaboration to create new context for exploring and documenting the relationship of people of color to the broader world. 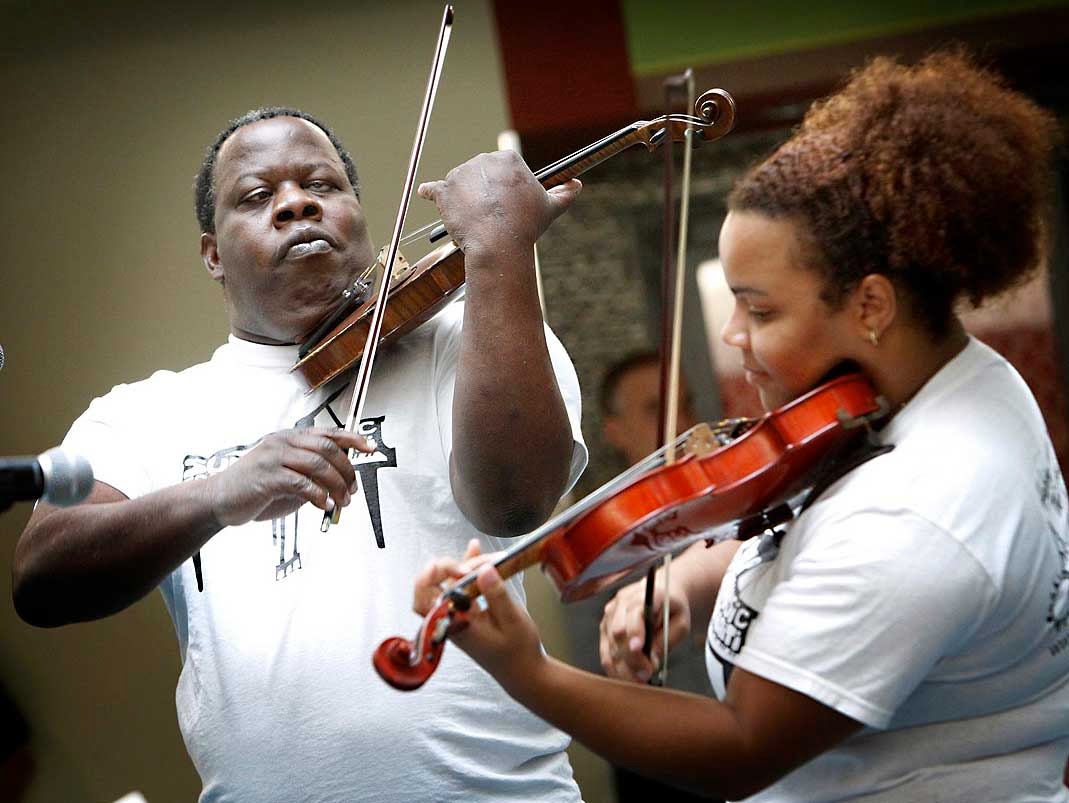 Romel Joseph marked the three year anniversary of Haiti's devastating earthquake by performing a violin concert for the people at Jackson Memorial who he credits with saving his life. Romel, who was trapped in the rubble of his Port-Au-Prince music school after the earthquake, with two broken legs, a broken arm and three broken ﬁngers also lost his wife and his school to the earthquake. With all of his injuries, Romel thought he would never play the instrument again, but after much rehabilitation, he went on to play a ﬁne concert three years later accompanied by his daughter Victoria.  The concert was a special assignment for me as I ﬁrst met Romel shortly after he was airlifted to Jackson. He was badly banged up and broken, he had lost so much, but he maintained a passion for life, his children and his music. It was such a pleasure to see him come so far and touch so many as he continues to share his music with South Florida and Haiti.

EMILY MICHOT has been a photographer at the Miami Herald since January, 1995. Born in Fairbanks, Alaska into an Air Force family, she traveled around attending schools in Florida, Massachusetts, Hawaii and Maine before moving back to Florida to attend the University of Florida and the Art Institute of Fort Lauderdale.  Michot shoots pictures and video for the Miami Herald and is married to Herald photographer Walter Michot. They have two sons, Ryan and Michael, and a chocolate labrador retriever named Cooper. 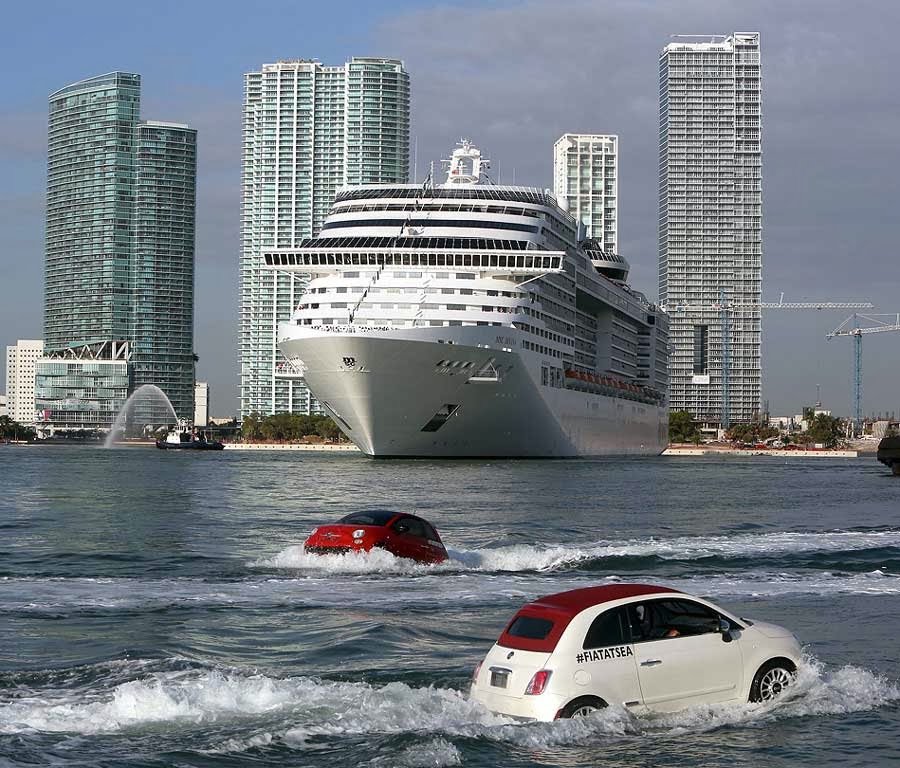 This photo captures ‘Miami' — Its sun, fun, water, fashion, tourism and economy all in one still image. For the last several years I have been covering a lot of crime and breaking news. This was a great chance to cover the flair and sweeter part of Miami. It's a break from the more negative side of Miami, and to express its uniqueness.

WALTER MICHOT, born and raised in Fort Lauderdale, Michot attended Chaminade High School and then attended Loyola University and Florida State University. Photography was his hobby, and turned profession. He has been shooting pictures for 40 years in South Florida and 30 with the Miami Herald, with over a million miles covered in Dade and Broward counties. He primarily shoots breaking news for online and print. He is happily married to Emily Michot, also a photographer with the Herald, and they have two great boys. Horticulture is his present hobby. 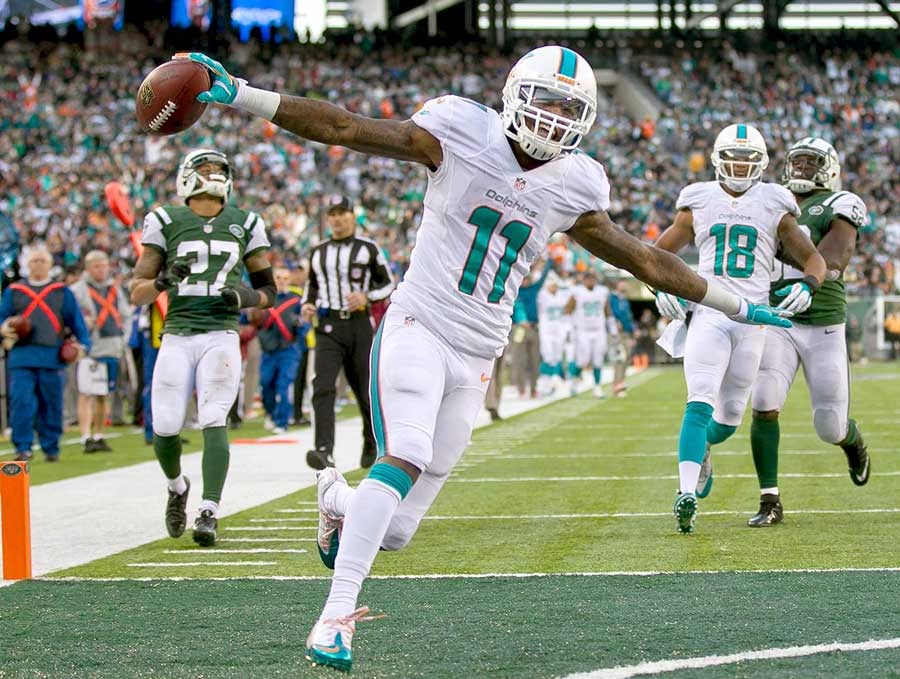 I was smiling as wide receiver Mike Wallace was flying into the end zone for a touchdown against the Jets. It is one of my favorite photos of the year because it was the last Miami Dolphins game I covered for the Herald. I was lucky enough to have switched cameras to capture him running right at me, and after the touchdown, as I checked the image on the back of my camera, I was grinning from ear to ear.

JOE RIMKUS JR. followed in his father's footsteps as a news photographer. His dad was a staff photographer for The Miami News, when Joe began working as a lab tech at the Miami Herald in 1973, while attending FIU. He quickly moved up to a staff photographer position, where he could pursue his great passion for sports. There were times when Joe Jr. and Joe Sr. would compete against each other at the same major sports event.   Editor's note: Joe Rimkus retired from the Herald in early December. Next season will be the first since the Miami Dolphins franchise started here in 1966 that there will be no Rimkus (father or son) shooting pictures on the sidelines. 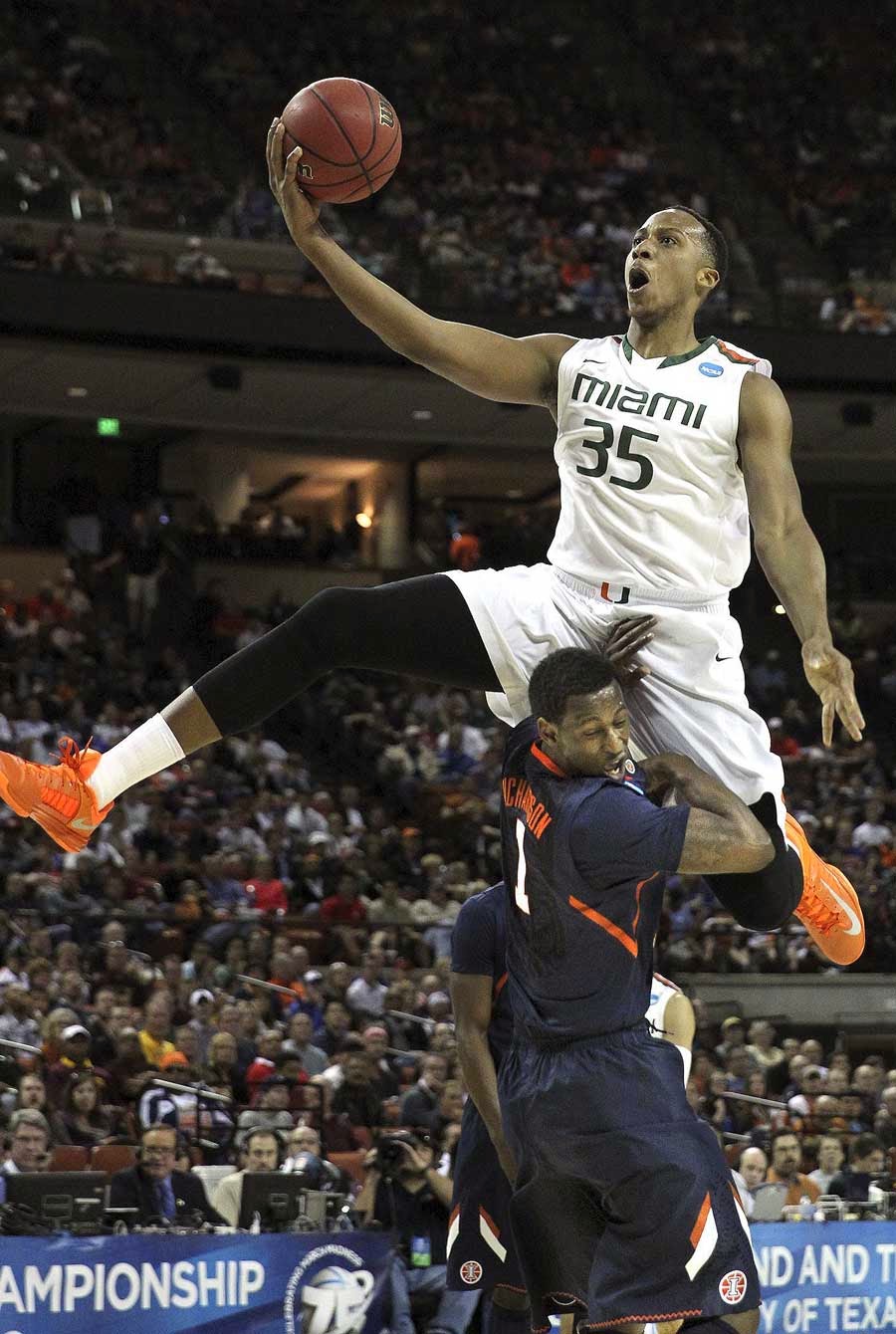 Miami Hurricanes Kenny Kadji leaps for a basket over Illinois Fighting Illini's D.J. Richardson in the third round of the 2013 NCAA Division I Men's Basketball Championship in Austin, Texas. This photo offered a peak moment of excitement, and a story-telling image showing the Canes' domination — They won the game.

CHARLES TRAINOR JR. joined The Miami Herald in 1981, and has covered most of the major news events that have impacted South Florida since. His extensive coverage of Cuba and the rafters' crisis of 1994 won him awards in national and international photography contests. Trainor covers the Miami Dolphins, Miami Hurricanes and he has intensely covered the Miami Heat and LeBron James throughout their championship seasons.
Posted by al diaz at 6:00 AM No comments: