Wade Missed but I Didn't

The Pacers even the series 1-1 as the Miami Heat can't keep pace.

At the AmericanAirlines Arena still photographers are not allowed to mount remote cameras at the basket or in the rafters except for NBA photographers. Frustrating when the official often stands right in front of you as LeBron James and Dwyane Wade work the paint.

To get around that I keep a third body on the floor next to me pre-focused and angled at the basket. I never saw Wade go up for this shot late in the game but I anticipated it, triggered the remote and captured the moment. Wade missed but I didn't. 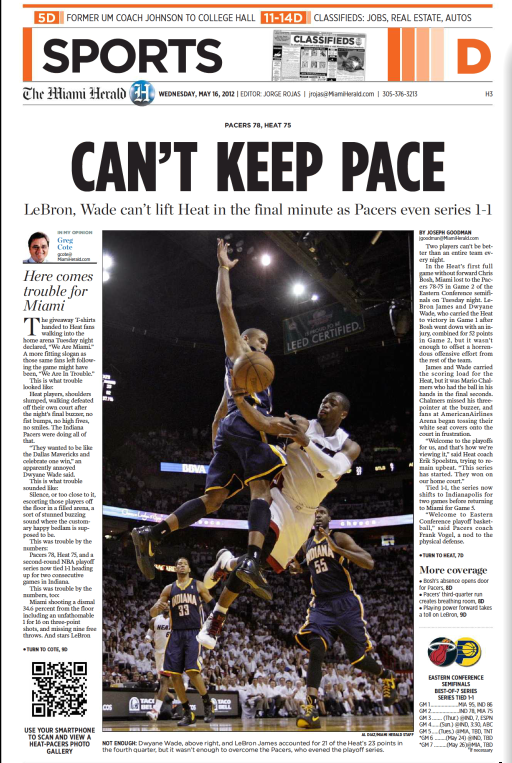 BY JOSEPH GOODMAN
JGOODMAN@MIAMIHERALD.COM
Two players can’t be better than an entire team every night.

In the Heat’s first full game without forward Chris Bosh, Miami lost to the Pacers 78-75 in Game 2 of the Eastern Conference semifinals on Tuesday night. LeBron James and Dwyane Wade, who carried the Heat to victory in Game 1 after Bosh went down with an injury, combined for 52 points in Game 2, but it wasn’t enough to offset a horrendous offensive effort from the rest of the team. Read more here:
Posted by al diaz at 10:18 AM 1 comment: