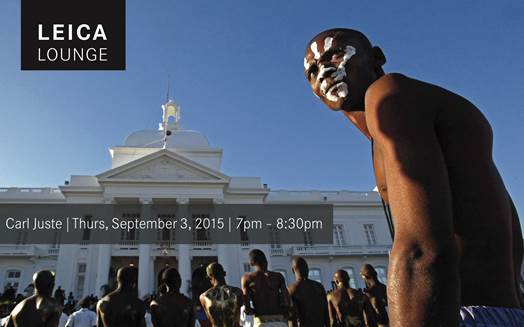 Join us in the Leica Lounge on Thursday, September 3, 2015 with Miami Herald photographer Carl Juste. Carl will be talking about the value of still images and why they still matter.
#Still Image Still Matters
With the onset with the digital age, are we moving so fast that we have forgotten to slow down gather are thoughts, reflect on our lives, and critically think and question before we act? The thirst to be first has been replaced with the hunger for the latest devices, technological advances, and coolest perspectives causing audiences to suffer from a saturation of visual stimuli, demanding the next photographic fix at any cost.
Photographic trends change like the newest fashion or dance step.  We, as visual communicators, are forced to feed the beast moving as if the photographic process travels at the speed of light, but at what cost? What would happen if we actually slowed down? If we stopped treating our subjects as just visual props?
The photographic process has been my passport to understand my engagement with the world.  In other words, "it has always been personal."  Caught in fraction of seconds to move audiences for years, is why I make images. The still image is not solely a product of reflection, but the source of initial investigation. Simply put it is the universal visual question of "why?".
The still image makes us pause as it translates our visual sensibilities into the singular definitive moment.  As photojournalists, we produce the most democratic contemporary art form.  The still image is the reoccurring birth of our values, prejudices, fears, and hopes presented in the visual language with no need of any additional interface.  The strong still image requires no advocate.  It stand alone regardless of it author.  It can be designed with purpose or an outcome of coincidence.  The still image still matters because its value is not how fast it moves but how quickly it moves its audience.
Leica Lounge is a lecture series hosted by Leica Store Miami which features presentations by local members of the photography community. Held monthly, these free events are designed to create and inspire the local photography community through sharing images and exchanging ideas.

The Leica Lounge is kindly sponsored by Brooklyn Brewery. Participants will be able to sample some of their amazing craft beers during the event. Brooklyn Brewery is one of the largest craft breweries in the United States, producing a portfolio of traditional and experimental beers sure to impress any beer drinker.
About Carl:

Under threat of persecution, Haitian-born Carl Philippe Juste and his politically active family were forced to flee their homeland in 1965. Settling in Miami’s Haitian community, Carl flourished academically and attended the University of Miami. He vigorously pursued photojournalism and, since 1991, has worked as a photojournalist for The Miami Herald. He has carried out extensive assignments for the Miami Herald in Haiti, Cuba, Brazil, Pakistan, Afghanistan and Iraq.

Juste has received numerous awards for his work,including the Robert F. Kennedy Journalism Award. His work has been exhibited in various prestigious institutions and galleries in Cuba, the Dominican Republic and the United States. Carl-Philippe Juste is one of the co-founders of Iris Photo Collective in 1998, a collaboration to create a new context in order to explore and document the relationship of people of color to the world. In the spring of 2010, Juste founded the IPC Visual Lab, a unique photography course that examines visual storytelling in the classical vein of photojournalism. Carl-Philippe Juste is currently working on his first book, Havana and Haiti: Two Cultures, One Community.

To view more of Carl's work, visit his website.