Robert Sullivan, one of Photo Workshops Miami’s instructors, will be conducting two photography workshops (beginner and advanced) at the Gold Coast Railroad Museum during a “Steampunk” festival on Saturday, April 21st. 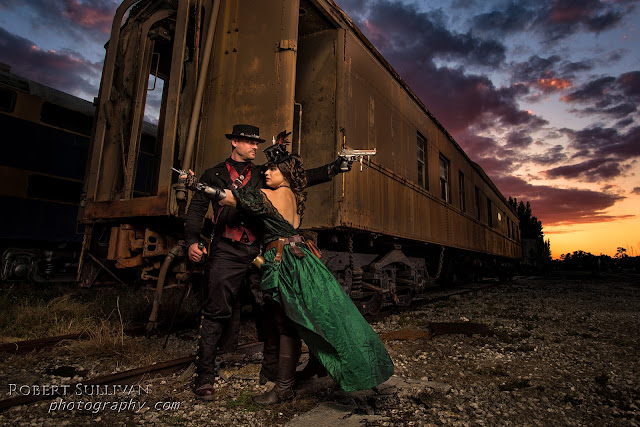 What the heck is “Steampunk”, anyway?  According to Wikipedia,
“Steampunk is a subgenre of science fiction or science fantasy that incorporates technology and aesthetic designs inspired by 19th-century industrial steam-powered machinery.”  Basically, it is an excuse for adults to dress up in Victorian era or Wild-West era clothing, decked out with gadgets, inventions, and weapons from an alternative future that came about as if gasoline engines or nuclear power were never developed.  For Robert Sullivan, one of Photo Workshops Miami’s instructors, it is an excellent opportunity to create amazing, cinematic style portraits of elaborately costumed characters. 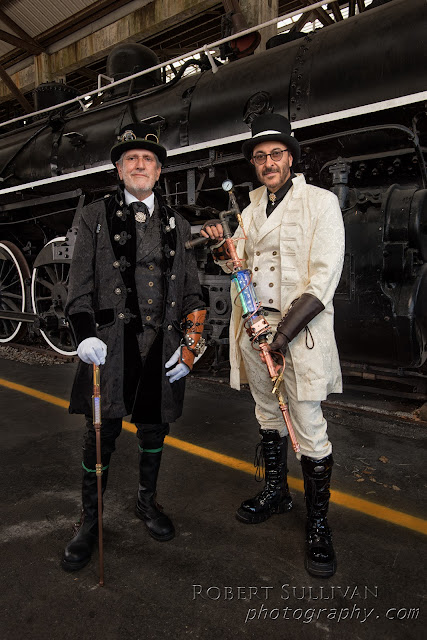 Robert has been photographing the creative, costumed participants in this genre for several years.  Last year, he conducted two, very well attended, advanced off-camera lighting workshops in conjunction with Rivet Nation’s RAIL – A Steampunk Journey event at the Gold Coast Railroad Museum in Miami, Florida.  Afterwards, he was inundated with requests for a workshop that would be geared towards beginner photographers as the material that he taught was over the heads of many who would like to get started in off-camera flash photography.
So, this year, he will again be teaching two workshops at Rivet Nation’s RAIL – Steampunk Under the Sea event on April 21st.  However, the first of the two workshops will be a Beginner photography workshop to accommodate those who are not yet ready for the advanced lighting workshop later on the same day.  Starting at noon, it will a very aggressive 3-hour workshop that will begin with a lecture on the basics in photography.  It will progress to shooting in modes other than automatic, and culminate with photographing Steampunk cosplay characters, under Robert’s supervision, in the setting of the locomotives and train cars at the Gold Coast Railroad Museum.  It is Robert’s ambitious goal to elevate the knowledge and skill of novice photographers to the point that they will be able to use a single off-camera flash to produce extraordinary portraiture in this 3-hour workshop and leave with some incredible images that they created. 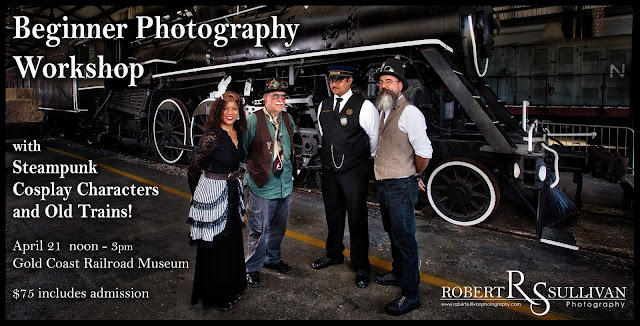 The second of the two workshops will be a repeat of the advanced off-camera lighting workshop that was so popular last year and will run from 5-8pm (think sunset!).  In this advanced, 3-hour workshop, participants will attend a brief lecture of less than an hour followed by the “hands-on” portion in which they will put to work what they learned.  Under Robert’s supervision, participants will practice photographing the Steampunk characters with an off-camera flash.  This advanced lighting workshop will culminate in a photo shoot using 4-5 remotely triggered studio lights that will be powered by lithium battery packs.  Steampunk cosplay characters will pose on and around a colorful antique caboose with the setting sun in the background while participants rapidly adjust their camera settings and studio flashes as they “chase the light” at sunset.  Robert will instruct on how to turn an ordinary scene into a spectacular image with a cinematic look, using in camera techniques as well as his post processing steps in Photoshop. 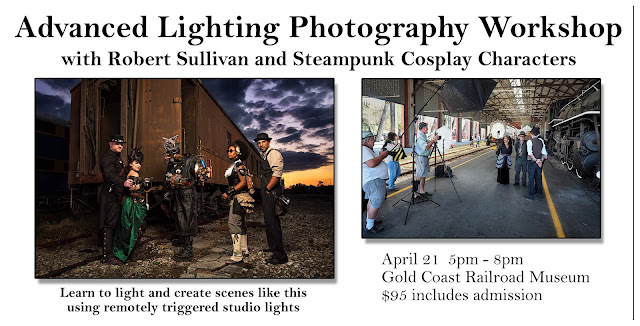 Here is one of the cinematic style images that he produced at sunset during one of last year’s workshops at the Steampunk Festival. 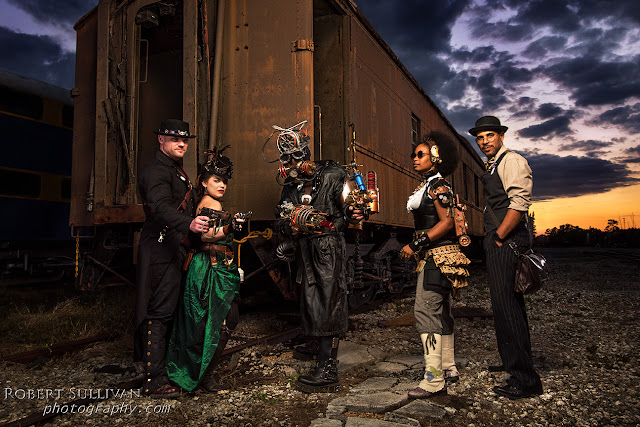 This caboose has already been relocated for Robert and will serve as the backdrop for the steampunk subjects.  It will be the scene of the sunset photo shoot for this year’s advance off-camera lighting workshop. 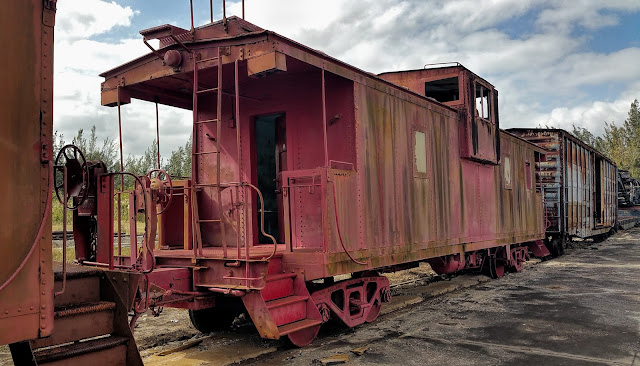 Participants of the beginner workshop who feel ambitious, can also take the advanced lighting workshop.  Even though it will be quite a leap, there is much that can be learned from taking both courses. The Beginner Photography Workshop with Steampunk Characters and Old Trains runs from noon-3pm on April 21st and costs $75.

Tickets for the beginner workshop can be purchased here:  https://www.eventbrite.com/e/beginner-photography-workshop-with-steampunk-characters-and-old-trains-tickets-41368308725

The Advanced Lighting Photography Workshop with Steampunk Characters runs from 5-8pm on April 21st and costs $95.  This advanced workshop is limited to only 12 participants so that Robert can ensure quality time working with the participants in the “hands-on” portion.

Tickets for the advanced workshop can be purchased here:  https://www.eventbrite.com/e/advanced-lighting-photography-workshop-with-steampunk-characters-tickets-41370145218

About Robert SullivanRobert Sullivan is an award-winning photographer who conducts local and destination workshops, instructing other photographers in several areas of photography including nature, landscape, and remote-triggered off camera flash photography.  He often travels up to 12 weeks per year to places such as New Zealand, Patagonia, British Columbia, and the Galapagos Islands.  His adventurous style of travel photography usually involves him staying in remote hostels or camping in his hammock-tent so as to enable him to be onsite during the best light to capture images of scenes that have not been photographed often, or to do so from unique perspectives that other photographers don’t see or won’t even attempt.  Rather than follow in the footsteps of those who photograph iconic landmarks, Robert looks for “the path less traveled” to discover unique scenes that, sometimes, even the locals don’t know about.

Many of Robert’s steampunk images can be viewed in his online portrait portfolio. Robert’s website:  http://www.robertsullivanphotography.com 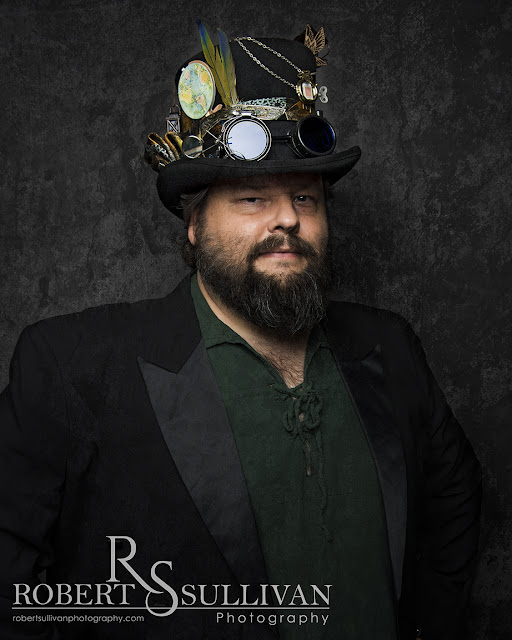 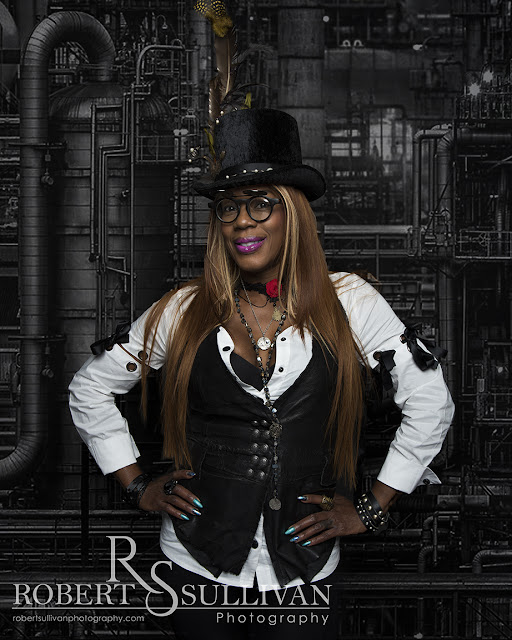 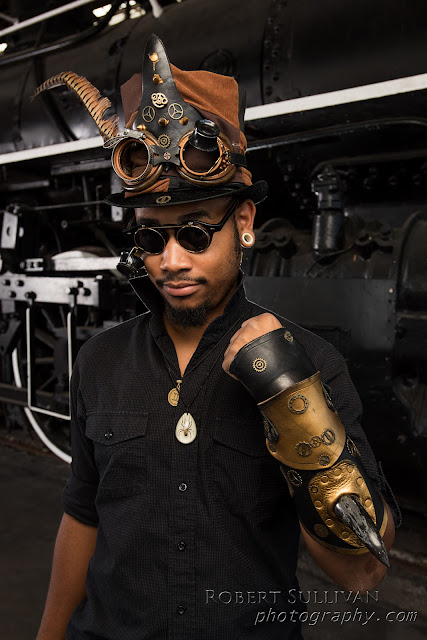 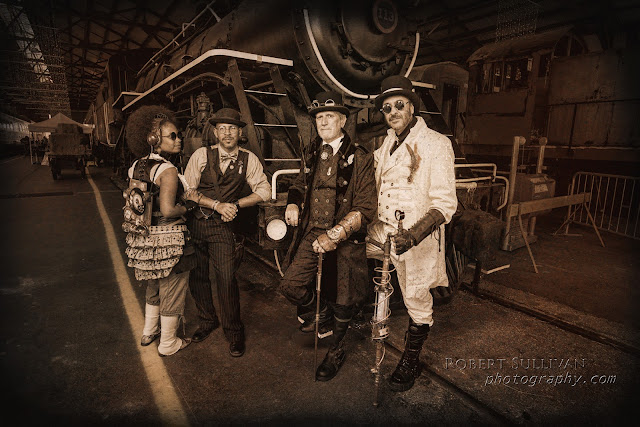 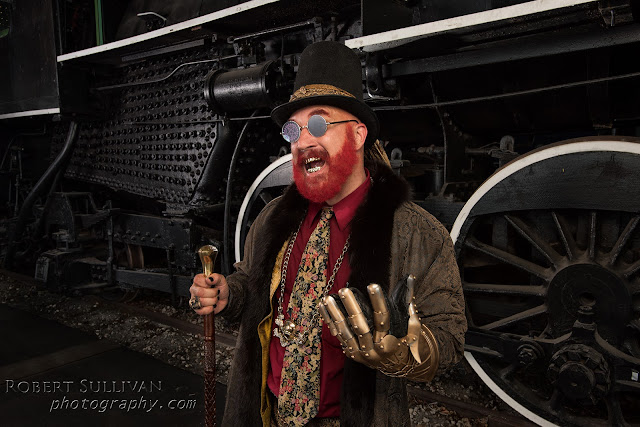 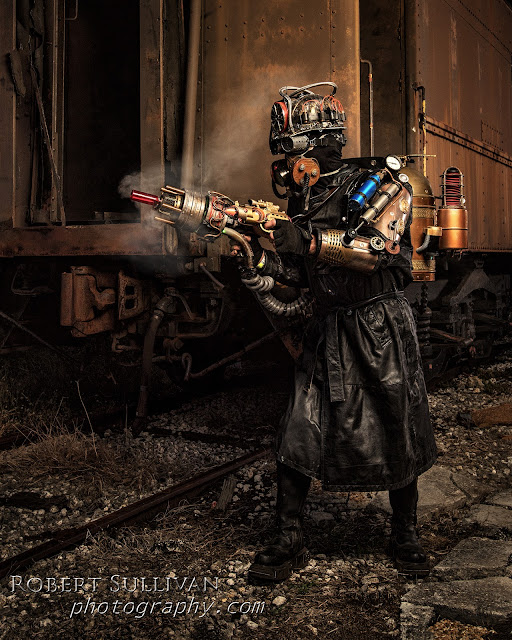 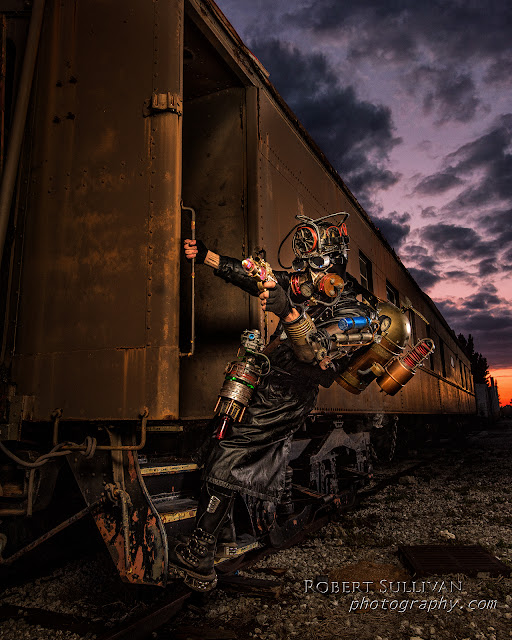