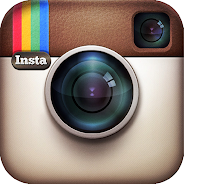 Q. Over the last few days, there have been quite a number of postings on Facebook about Instagram, with various people and organizations threatening to boycott the service.  Will Instagram have the right to license images for advertising purposes?

A. What you’ve witnessed is the result of a company attempting to impose heavy-handed terms and conditions on its users.  The uproar started when Instagram announced that it would be changing its Terms of Use (TOU) effective January, 2013.  While perhaps not Instagram’s intention, under the new TOU, users give Instagram the right to use a user’s name, likeness, and even photos in advertising.  The TOU also contain a series of representations, including that the user posting photographs is not violating any privacy rights, and that the user will pay all royalties and fees owing to any person by virtue of a photograph being posted to Instagram.  Separately, these terms can be trouble enough, but together, they have the potential for creating a nightmare situation.

Imagine for a moment that the new TOU go into effect, and that some time later, you used Instagram to post a photograph of a professional athlete prior to a sporting event.  Under those TOU, Instagram has the right to license that image for advertising purposes, and Instgram is not obligated to share the license fees/royalties with you.  Now, it’s bad enough that you’re missing out on sharing in the license fees for the commercial use of one of your images, but under this scenario, the TOU go a step further to add insult to injury.  Since you probably didn’t obtain a model release from the athlete featured in your photo, the athlete now has a claim for the use of his or her image in connection with advertising.  Under the TOU, however, you, the photographer, who used the Instagram service, are responsible for paying “all royalties, fees, and any other monies owing any person by reason of [photos] you post on or through the Instagram service.”  So at the end, Instagram gets to keep the license fees for the commercial use of your photo, and you get to pay the athlete who didn’t sign a model release. 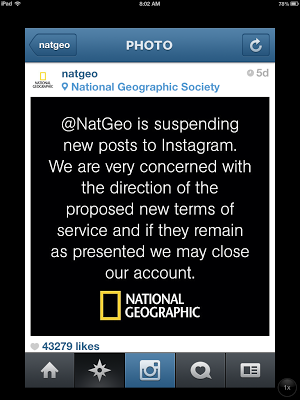 In response to the TOU that were scheduled to goes into effect, National Geographic—who in early December was ranked as the number 1 media brand on Instagram with 588,000 Instagram followers—posted an announcement that it was suspending new posts.  The announcement reads:  “@NatGeo is suspending new posts to Instagram.  We are very concerned with the direction of the proposed new terms of service and if they remain as presented we may close our account.”

Q. You mentioned that the TOU were scheduled to go into effect.  Will they be going into effect?

A. That really seems to be the big question right now.  Instagram’s co-founder and CEO, Kevin Systrom, announced that it was not his company’s intention of selling users’ photos.  However, that did not stop numerous celebrities and companies from announcing publicly that they would discontinue use of Instagram.  In an apparent effort to avoid losing more users over the TOU snafu, Instagram has now scrapped the TOU that were scheduled to go into effect on January 16, 2013, and replaced them with a new set of new terms.  While the most recent TOU seem to omit some of the language that sparked the uproar, it still includes some potentially problematic verbiage.

Under the most recent TOU, the license that users grant to Instagram is “royalty-free” and “sub-licensable,” meaning that Instagram will have the right to license the photos posted through the service without having to share royalties or license fees with the photographers.  The only exception to the license is Instagram’s privacy policy.  While it may be possible for individual users to indicate that photos are private and not for public viewing, that limitation won’t help entities like National Geographic.

It also bears noting that the new TOU may not avoid the nightmare situation I’ve already described.  They are just not as in-your-face as the TOU that sparked the uproar.

The new TOU also contain some fairly comprehensive language that limits Instagram’s liability, requires its users to pay the cost of defending Instagram against claims made by virtue of images posted to the service, and a provision that significantly limits the time in which a user may bring a claim against Instagram.

The new terms also include an arbitration provision.  Arbitration is a form of alternative dispute resolution, and it allows people to resolve their disputes as they would in court.  There are pros and cons to arbitration, which are more thoroughly explained in my recent article, Arbitration Friend Or Foe? (http://www.digitalphotopro.com/business/arbitration-friend-or-foe.html) which appeared in the November 2012 Digital Photo Pro magazine.  One potentially positive aspect of the TOU is that it allow users to opt out of arbitration by notifying Instagram in writing within 30 days of the date the user became subject to the arbitration terms (for existing users, that’s within 30 days of when the new terms go into effect), and the notice must be sent to:  Instagram, LLC ATTN: Arbitration Opt-out 1601 Willow Rd. Menlo Park, CA 94025.  Given the time-limitation, users of the service should decide for themselves whether to reject the arbitration and notify Instagram of that decision.

The new TOU contain many more changes than I’ve mentioned.  Anyone who uses Instagram should really compare the old terms and new terms to get a sense of what will be changing.  The current terms can be found here:

and the terms scheduled to go into effect on January 19, 2013 can be found here:

Samuel Lewis is a Board Certified Intellectual Property law specialist and partner at Feldman Gale, P.A. in Miami, Florida, and a professional photographer who has covered sporting events for more than twenty-five years.  He can be reached at SLewis@FeldmanGale.com or SLewis@ImageReflex.com.